Due to the extensive fire damage that resulted from the Woolsey Fire, the City’s Public Works Department prepared a series of Flood Risk & Vulnerability Maps to help guide and prioritize City emergency activities. These maps, which are now available to the general public, will help residents in vulnerable areas protect themselves by being mindful of flood hazard risks that have the potential to exist during a strong storm event. The Los Angeles County Sheriff’s Department, as a vital first responder, has participated in the development of these maps, as information was shared.

The maps are created for emergency planning purposes based upon the available information. The City is in the process of enhancing and expanding the maps and models for other uses over time.

The maps below are broken into specific areas, indicated by the numbers within the boxes on the Index page. Specific neighborhoods are detailed on the additional pages of the linked PDF. Pages are able to be scaled to the property level. 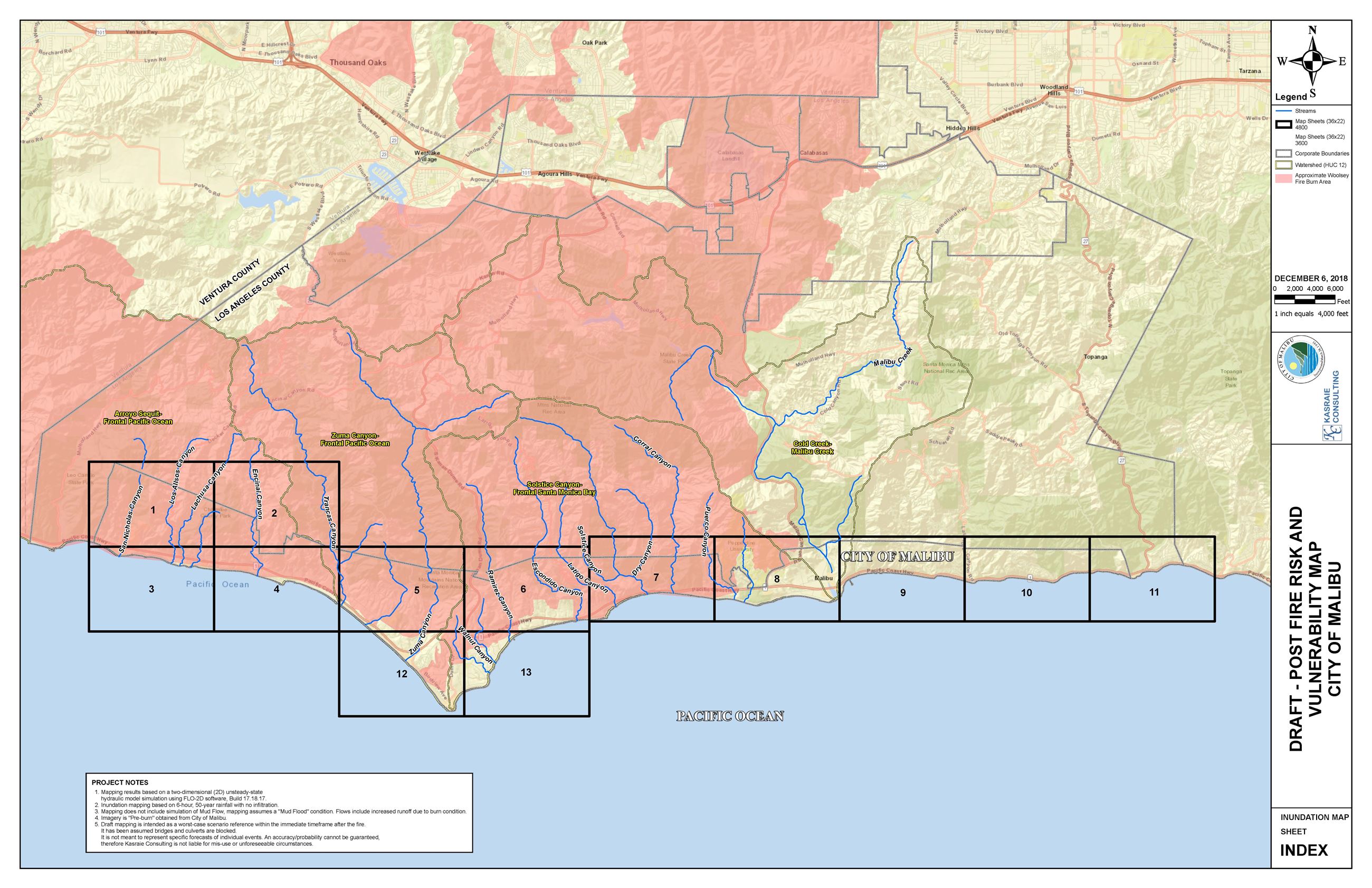 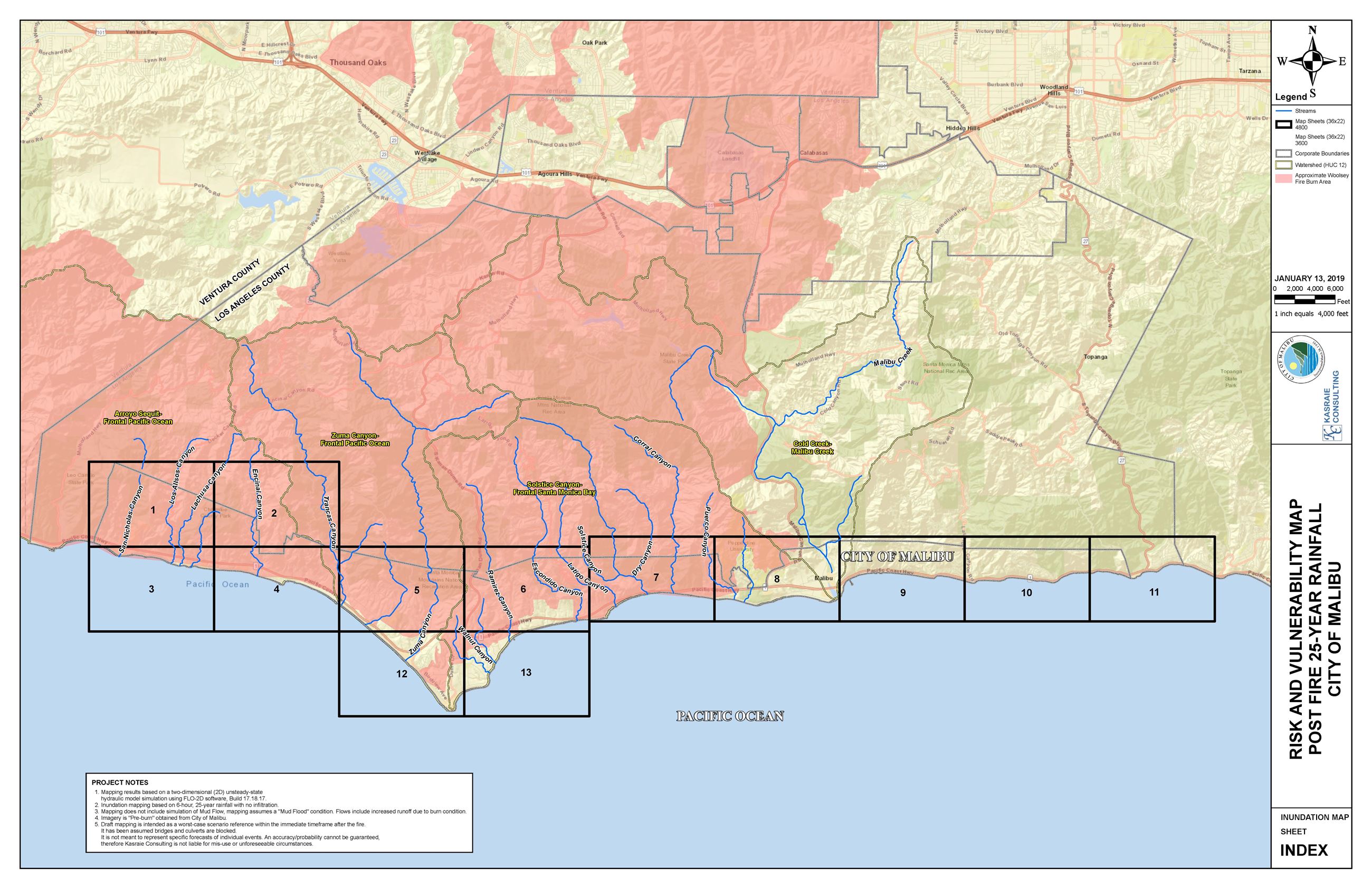 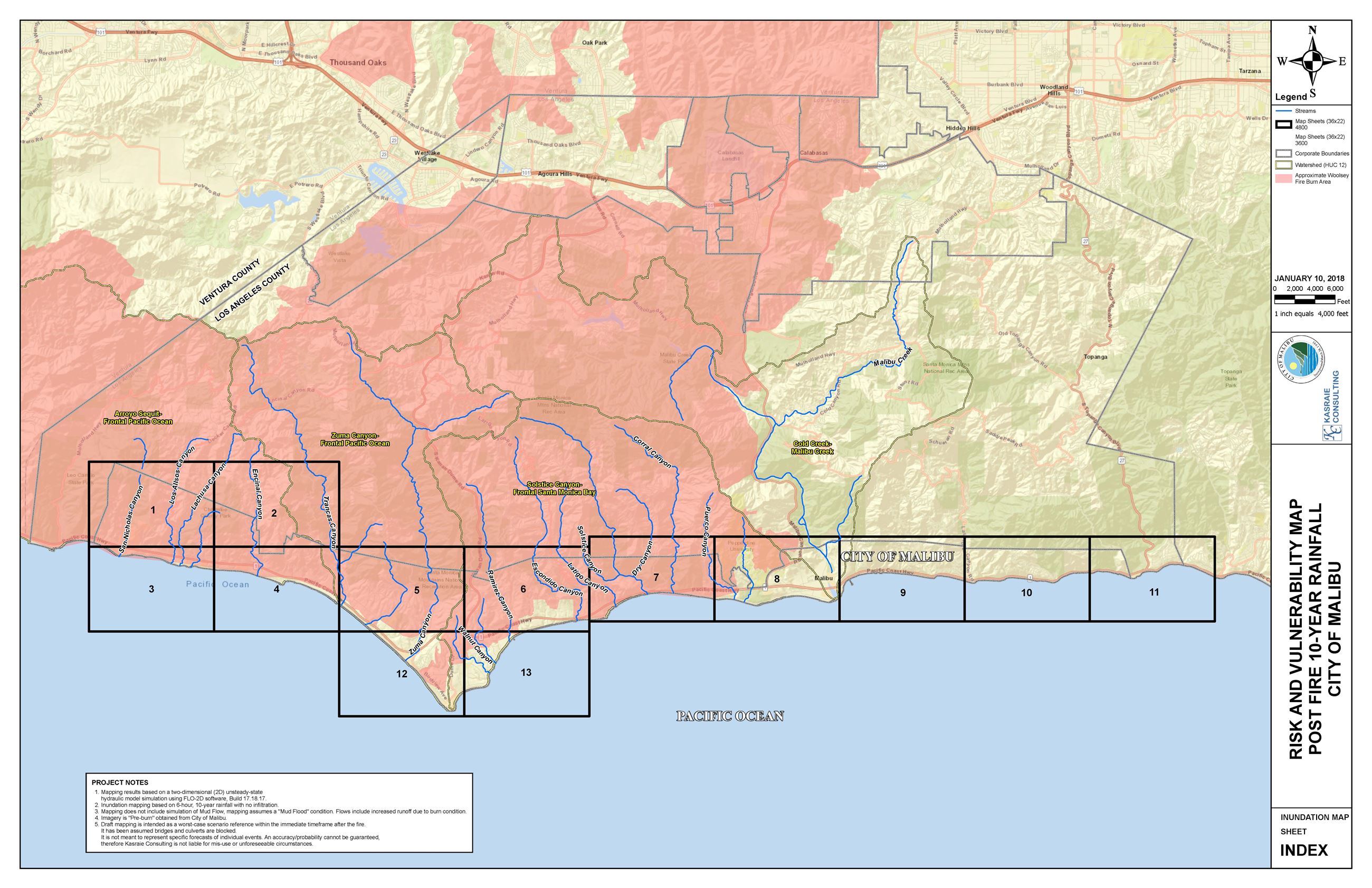 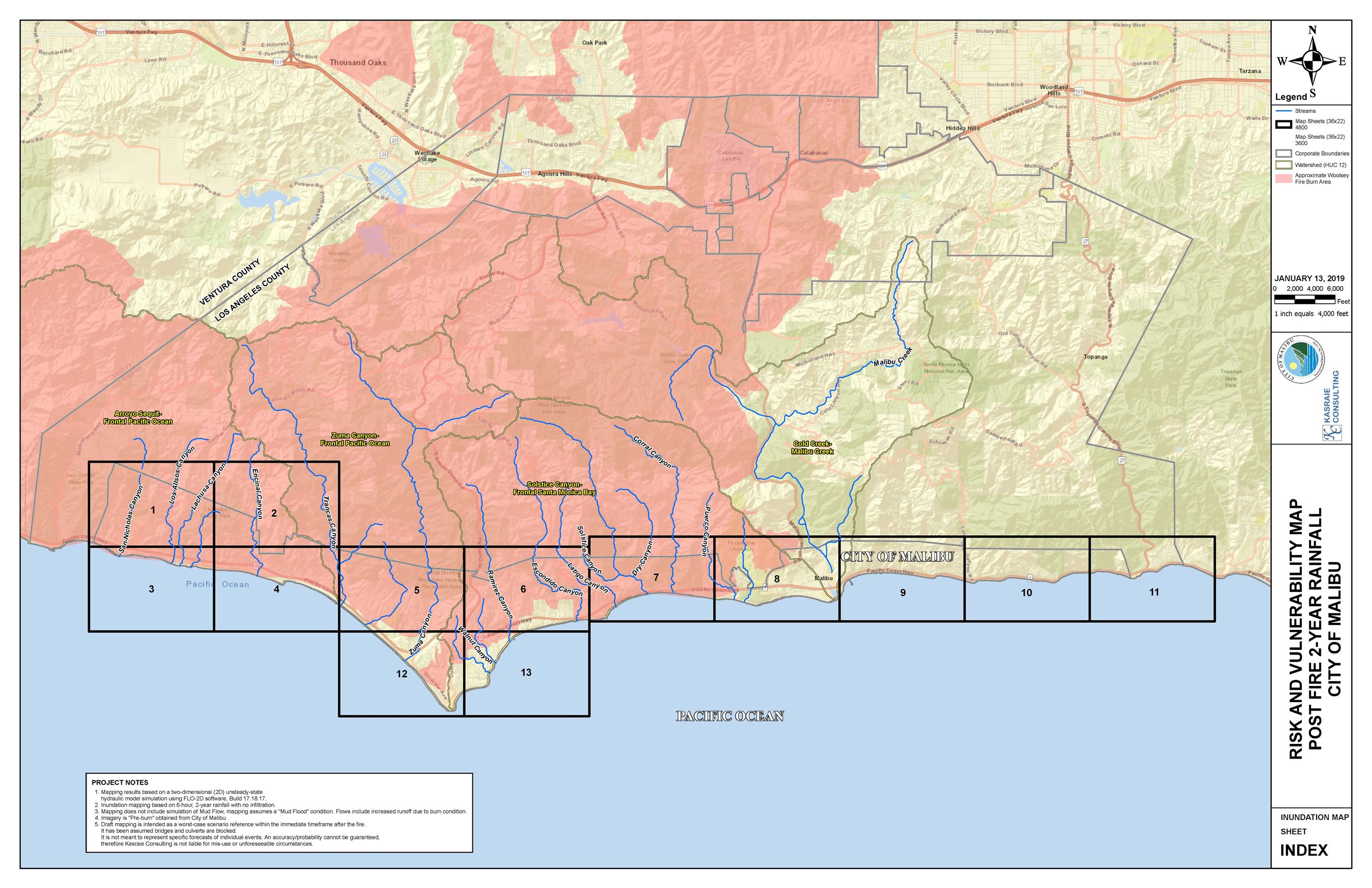 The Draft Post-Fire Risk & Vulnerability Map is the mathematical product of Flood Depth and Flow Velocity calculated in GIS based on a hypothetical six-hour, 2-year, 10-year, 25-year, or 50-year rainfall with little or no infiltration. This information was then categorized in the form of the following Flood Severity Categories (in accordance with FEMA Guidance Document 14):

Areas shown in red or orange may be at a higher risk for flooding or mudflow; however, caution should be taken in all areas of the City affected by the recent fires.

How the Maps Were Prepared

Flood hazard maps are created using hydrologic computer modeling and simulations. A three-dimensional, topographic surface model of the entire watershed area of the City and the foothills north of the City was prepared using the latest terrain elevation data. It was assumed that all the storm drains and culverts were completely blocked, and that they would not carry significant runoff. An average National Oceanic and Atmospheric Administration (NOAA) Atlas 14 rainfall was placed over the entire watershed area to see where the water would flow over land. Mapping results are based on a two-dimensional, unsteady-state hydrologic computer model simulation using the FLO-2D Pro and HEC-RAS 2D software programs. Inundation mapping is based on a hypothetical six-hour, 50-year rainfall with little or no infiltration. This mapping does not include simulation of mudflow.  The modeled flows include increased runoff due to burn conditions, and the added assumption about blockage in the local drainage system.

Due to the tremendous potential for debris and sediment accumulation, it is difficult to know exactly how the local drainage systems will function. The local drainage systems, consist of private and public systems, including debris basins, open channels, catch basin inlets, storm drains, culverts, and bridges, may become partially or completely clogged and silted up during the rainy season.

It should be noted that the City of Malibu and County of Los Angeles are actively removing clogged and silted up systems before and after each storm event within their respective rights-of-way.

This clogging is a cause for concern as the runoff and debris flow that does not pass through the storm drain system will flow overland and inundate parts of the City. These maps represent the potential path, extent, and depth of flooding as a result of the Woolsey Fire.

The draft mapping is intended as a worst-case scenario reference within the immediate timeframe after the fire. It has been assumed bridges and culverts are blocked. It is not meant to represent specific forecasts of individual storm events. Accuracy/probability cannot be guaranteed; therefore, the City and its consultants are not liable for misuse of this mapping or unforeseeable circumstances.